172 Ontario St. Burk’s Falls ON
(Across from the Home Hardware Parking Lot)

Cement sculptures of “The Screaming Heads,” trees, gigantic spider webs holding down the Four Horsemen of the Apocalypse, and more… Walking trails, peacocks, swans, geese, and ducks arounds the house and ponds. “Reminiscent of Stonehenge, with attention to the configuration of heavenly bodies…… Like solar fins, contorted by the tension of light and dark, the disks scream to eternity”. Screaming Heads can be found just off of the Nipissing Colonization Road or accessed from highway 520 just west of Burks Falls.

Both sites are operated by the Burk’s Fall and District Historical Society.

Location: 112 Midlothian Road, Township of Ryerson
Hours of Operation: May to Thanksgiving –  Thursday, Friday, Saturday & Sunday 11:00 am – 4:00 pm
Admission: A suggested donation of $2/person or $10/family. 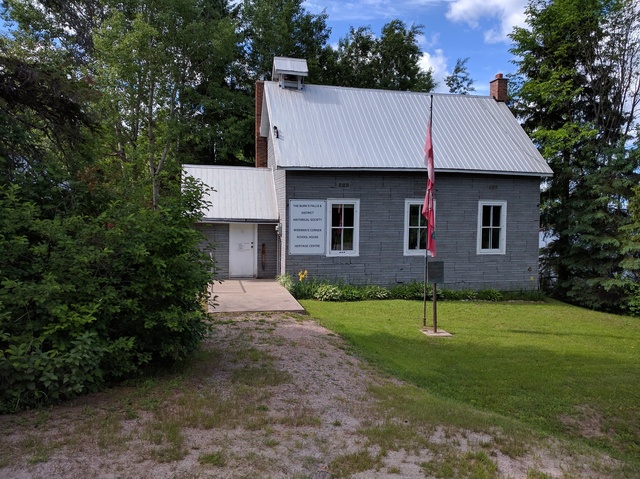 who first settled in this area. Located at Wiseman’s Corners, the building is that of the original schoolhouse, S.S. #4 Ryerson. The school was built in 1893 and carried on successfully for about 45 years. The land consists of a half acre and was purchased in 1892 for $1.63. That sum included 63 feet of lumber. Collection consists of many family artifacts including an pump organ, doctor’s desk and tools, lumbering tools, horse equipment, household items including cream separator, many pictures of the riverboat era, war memorials, family histories, and local residents’ pictures. Walk back through the history of the local area, from pioneering days, steam ship days, and the logging/lumbering era. Visitors are invited to view materials on display. There is free parking, a picnic area, and public washrooms.

Items On Display Include: 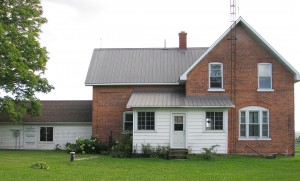 John Russell Watt was born to Alexander and Euphemia (Gibson) Watt on March 14, 1856, in Lanark County. In 1874, he came to Armour Township and settled on Lots 10 and 11, Concession 7, at Watt’s Dam near the Magnetawan River. This property was obtained through free grants during Queen Victoria’s reign in 1878.

The property was purchased in May 2012 by Northland Power as the site for the company’s Solar East project. After seeing the historical value of the house, Northland Power entered into an agreement with the Burk’s Falls and District Historical Society.

Today, the Watt Century Farmhouse is the second heritage Centre of the Burk’s Falls and District Historical Society. It was officially opened at the society’s Heritage Day on July 25, 2015.

Information and pictures obtained from The Near North Heritage Group, Museums Canada, and http://www.burksfalls.net/Museum.htm